Speak to us today

At the annual dinner held by Farmers Weekly magazine on the 2nd October at the Grosvenor House Hotel in London, winning farmer, David Horler received his award form AgriBank founder Frank Sekula after winning the Diversification Farmer of the year award for 2014. 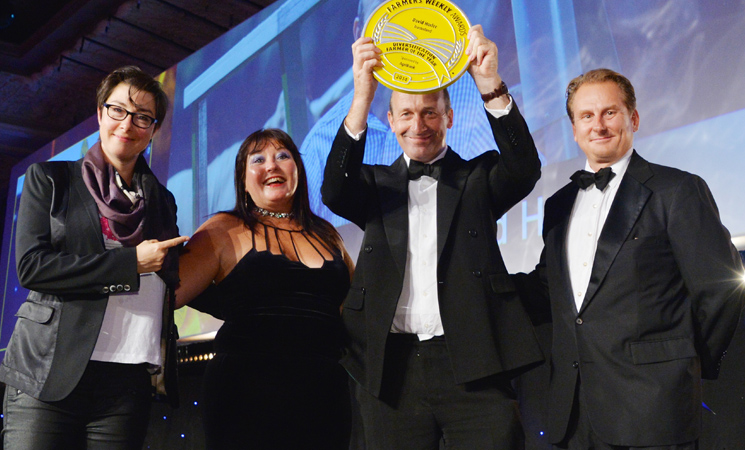 David who runs Highchurch Farm in Radstock Somerset is behind the Tractor Ted range of children’s books, DVD’s gifts and clothing popular with two to six year olds across the UK. He beat David and Diana Harper of Top Barn Farm, Worcestershire and Helen and David Harrison of Greyabbey, Newtonwards in Ireland to win the award.   The Tractor Ted story began in 2001 when David and his friend Ally Heard saw the fascination of young children with farm machinery in their fields. 17 DVD’s and 11 books later, the Tractor Ted brand is now stocked in 600 country shops in the UK and Ireland.

The smiling Green tractor is also the face of play farms in Wiltshire and Perthshirethat attract 250,000 visitors a year and have an annual show.   On the farming side, David has left the management of his 200ha organic farm to his nephew Tom, to grow wheat, barley red clover and running a 50 cow suckler herd.   Looking forward, David has a clear strategy to develop the business further. Consistently it has delivered 15-20% revenue increase every year for the past ten years and he is now looking to open a third play farm in Hampshire and exploring the idea of Tractor Ted branded play barns.   “The vision for Ted is to get into more urban homes, to get the message to those children about farming” David says. “It’s all about where the food comes from and we want more people to connect with farming”

We use cookies to make your browser experience more efficient and enjoyable, as well as to analyse the use of this website. If you continue to use this website we will assume you consent to receive all cookies. However, you can change your cookie settings at any time. Thank you